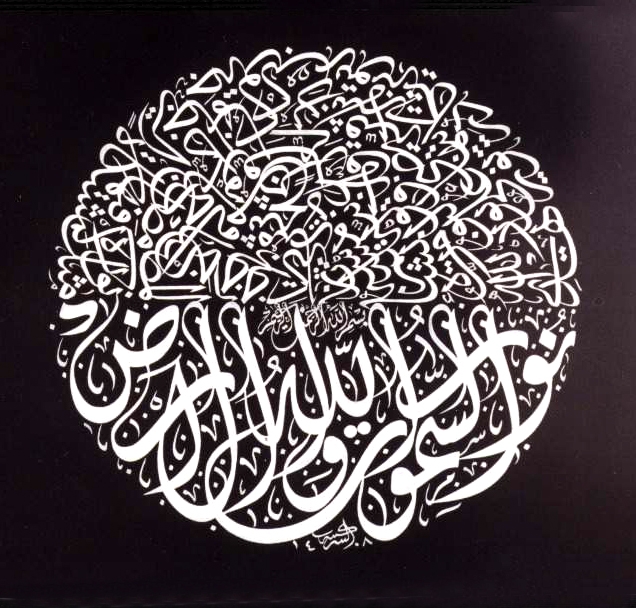 Arabic calligraphy originates from the wish to give the Word of God the most beautiful possible form. Together with architecture calligraphy has developed into one of the most important art forms in a culture, which very late – and with reservations – has embraced the visual arts.
Or in the words of calligrapher M.S. Saggâr: "The Arabic letter is a symbolic picture of the linguistic sound, and Arabic calligraphy is the art of drawing this picture."
In cooperation with Directorate of Art, Department of Culture and Information in Sharjah, The United Arab Emirates, The Royal Library presents an extraordinary exhibition of both contemporary and historical arabic calligraphic works of art.
For more information: http://www.kb.dk

Arabic Calligraphy
Being able to read and write is of particular importance in Islam as the Koran is believed to have been dictated directly to Mohammad, and Arabic calligraphy originates from the wish to give the words of God the most beautiful earthly form possible. Together with architecture, calligraphy has developed into the most important art form in a culture which very late – and with reservations – has embraced pictorial art.
The pen is considered to have been the first God created, to write the eternal source for the Koran, and writing is thus a core ingredient in Muslim identity. The letters become carriers of beneficent force, each single letter represents a praise to God, and calligraphers consider their work to be especially closely related to the divine.
You first meet calligraphy in Koran manuscripts and on religious buildings, after that in other manuscripts as ornamentation of particularly title pages and chapter headings and to give poetic texts visual expressiveness. Calligraphy is practised by the Sufi mystics as a meditative discipline and by painters as the basis for abstractions.
The elevated position of handwriting in Islam has meant that handwriting and the individual letters have been subjected to intensive interpretation, not only of any apparent meaning, but also of the underlying significance.
The basis of calligraphy is the writing, the enhancement of which is a skill, which can be practised and a graphical aesthetics, which can be learned – with a view to adding emotional value to letters through controlled sense.
But calligraphy can also influence its creator and contribute to an expansion of the mind providing profound religious experiences – and new, subjective calligraphy to reflect these.
Thus calligraphy is a form of communication that has turned into a modern art form, where the shape of the word develops into an abstract or concrete image – an artistic dynamic complexity between rational intent in terms of form and also emotional fulfilment.
The Iraqi calligrapher M.S. Saggâr describes his attitude to calligraphy in the following way:

"If the Arabic letter is a symbolic picture of the linguistic sound, Arabic calligraphy is the art of drawing this picture.
Between calligraphy and the letter there is the same relation as between art and its material, between poem and word, statue and marble. When talking about Arabic calligraphy we are dealing with great art in continuous development – art of great aesthetic value, charged with associations and imbued with it own enthralling world. It charms the eye and brings infinite pleasure, cleansing and reflection – far from the ordinary handwritten text with its echoes of sound and specific significance. For the experienced calligrapher the idea is to explore the unity of the universe, to delve deeply into our inner lives, to express the innermost, purest emotional core in our minds.
For the most part abstract art requires a certain level of knowledge about its background, as well as experience in order to be able to appreciate it. Without a key it is difficult for the person meeting art for the first time to be admitted into its particular world, despite the fact that it is based on elements that stimulate the eye – lines, colours, volume and material. It is quite another matter in the case of Arabic calligraphy which can be immediately appreciated and understood without the prerequisites mentioned. The inner beauty of calligraphy is apparent at first glance, particularly if it is done by a talented calligrapher.
Thus calligraphy is not only an embellishment of Arabic handwriting, although its origin lies here. Gradually, calligraphy established its own particular world, controlled by thoroughly defined aesthetic rules and subject to norms of proportions, developed and determined by creative calligraphers during many centuries. These rules dictate harmonious concord between the letters and a subtle proportioning that appeal to the soul. Calligraphy is familiar to the eye, and the hand finds is easy to execute.
Arabic calligraphy's interplay with writing is flawless and full of meaning. Calligraphy started as an embellishment of Arabic writing, but has since left this behind and moved into its own independent existence."

The exhibition 'Written Images' presents a wide selection of historical and modern arabic calligraphic works of art.
The exhibition and the catalogue also give an introduction to the different types of writing and calligraphy's development and construction – a key to understanding the extraordinary works.
The exhibition is compiled in a cooperation between The Royal Library and Directorate of Art, Department of Culture and Information in Sharjah, The United Arab Emirates. 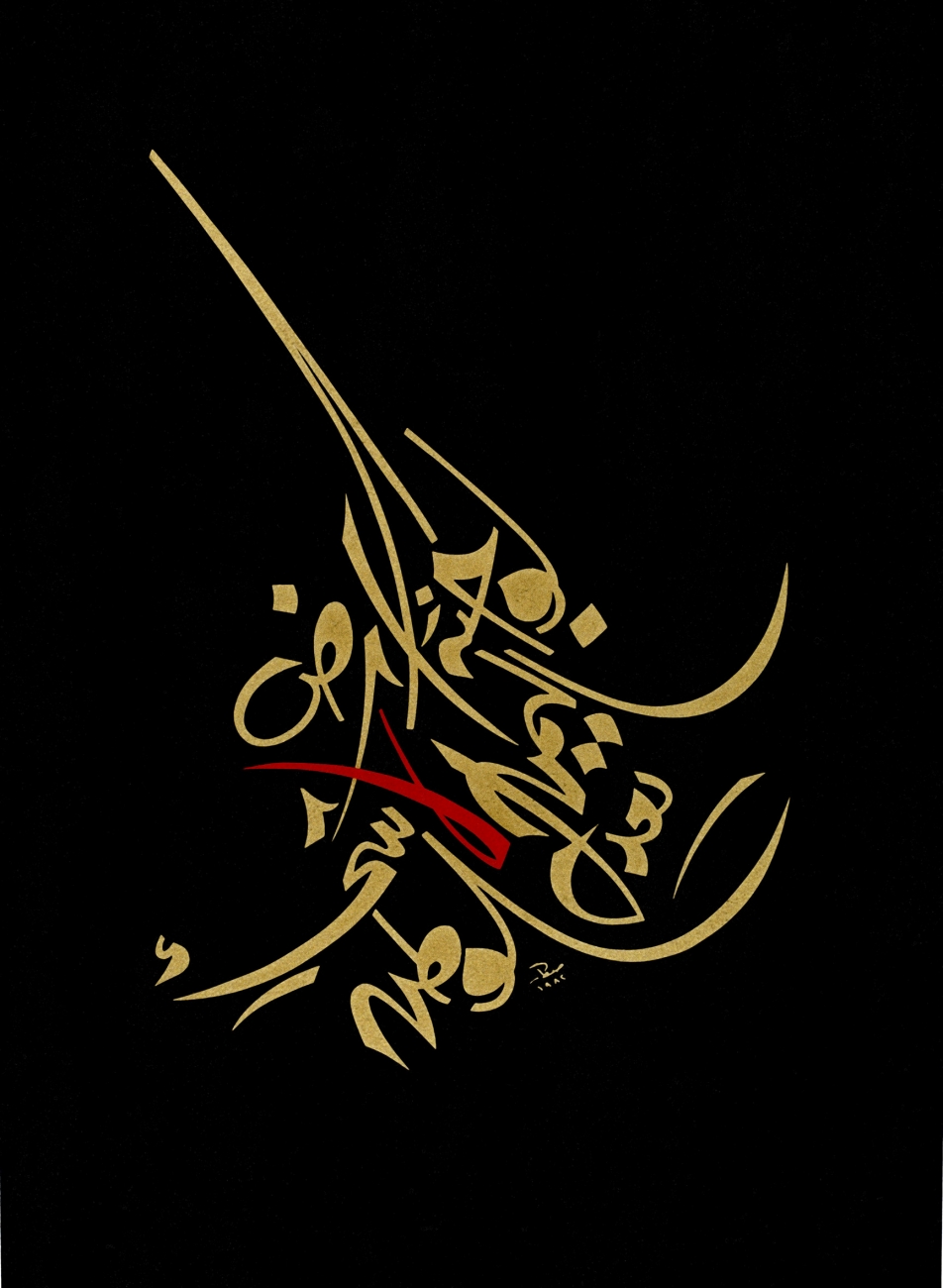 M.S. Saggâr: EVEN IF YEMEN WAS A PARADISE ON EARTH, NOTHING IS ON A LEVEL WITH ONE´S NATIVE LAND. 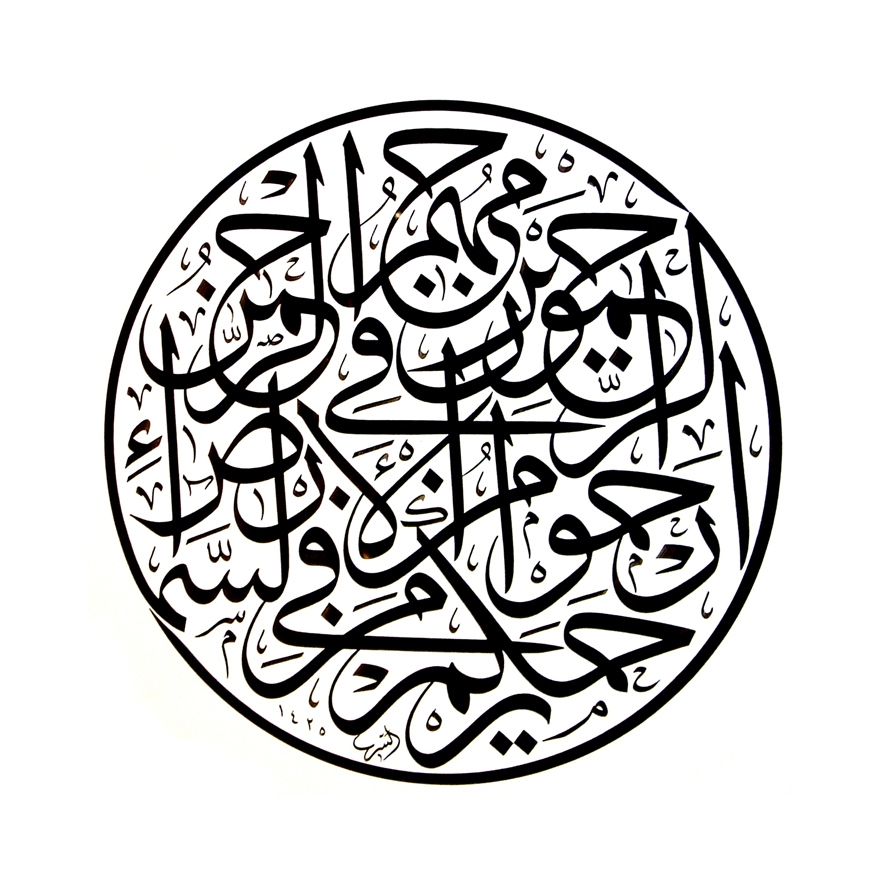 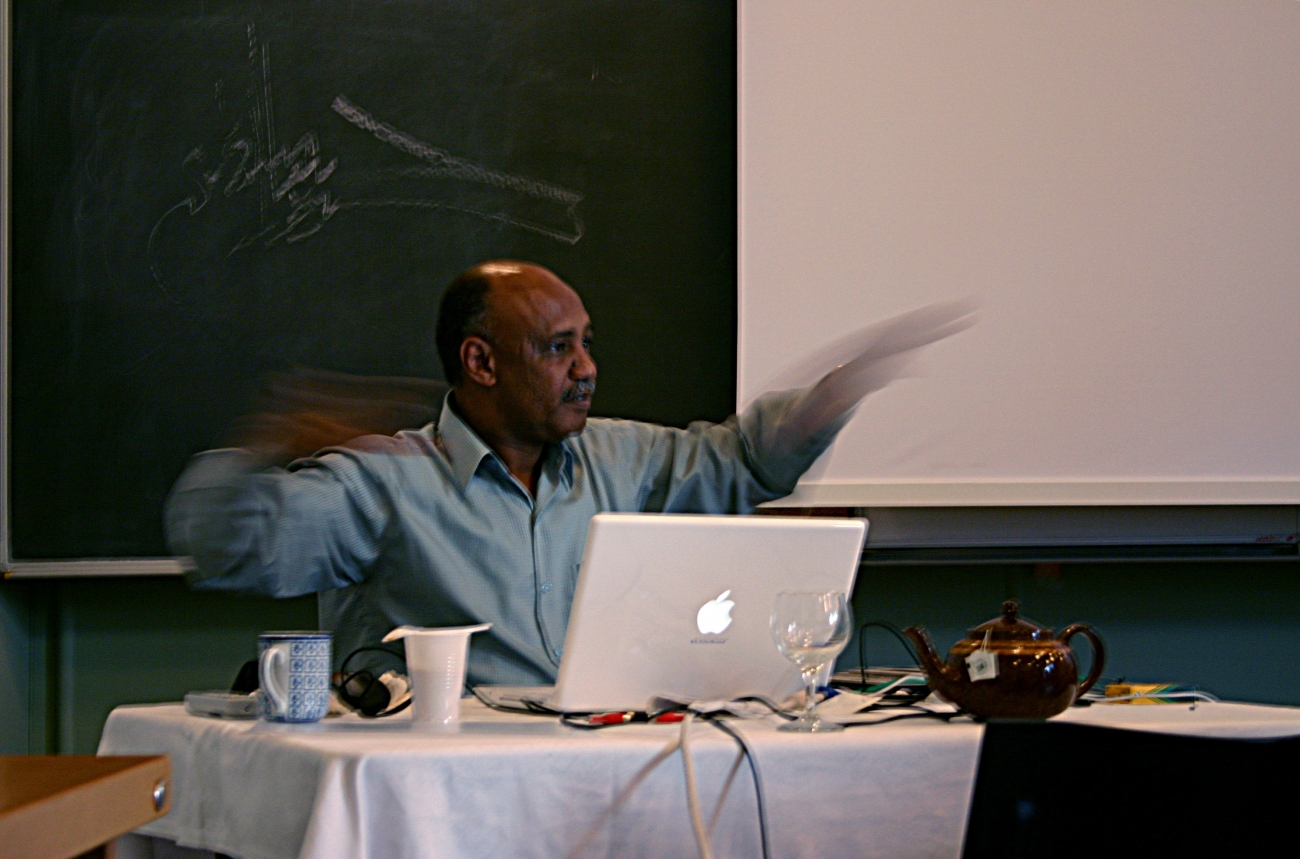 THE LYING ALEPH. Workshop by Tagelsir Hassan at The Royal Danish Academy of Fine Arts.

During the exhibition the calligrapher Tagelsir Hassan gave a special workshop THE LYING ALEPH  for students at The Royal Danish Academy of Fine Arts.

Mr. Abdullah Al Owais (Director General of the Deptartment of Culture & Information, Government of Sharjah) commenting on the importance of cultural exchange between Sharjah and Denmark.

Sharjah, May 23, 2007 (www.http://wam.org.ae)
An Arab calligraphy show opens tomorrow at the Royal Library in Denmark.

Director General of Sharjah's Department of Information and Culture, Abdullah bin Mohammed Al Owais and the director of the Department's Arts Section, Hisham al Madhloom will attend the opening ceremony of the exhibition in which 23 artists in Arab calligraphy and Islamic decoration will showcase 65 of their selected works.
In a statement prior to his departure to Denmark, Al Owais cited the great importance attached to culture by H.H. Dr. Sheikh Sultan bin Mohammed Al Qasimi, Supreme Council Member and Ruler of Sharjah, who, he said, gives utmost priority to culture, which he regards as an effective means of supporting dialogue among civilisations and peoples of the world.
He said relations between Sharjah and Denmark, although not new, had witnessed significant achievements over the last ten years having witnessed a number of technical and cultural achievements on both sides. 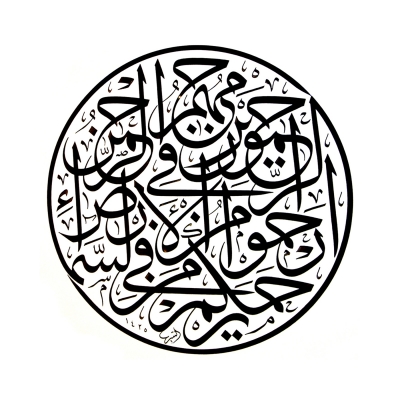 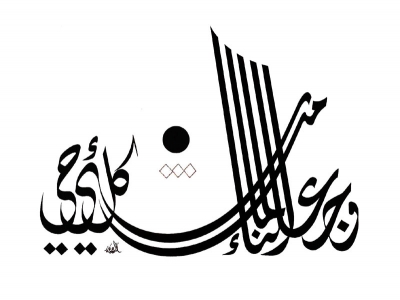 M.S. Saggâr: AND FROM WATER WE CREATED ALL LIVING THINGS 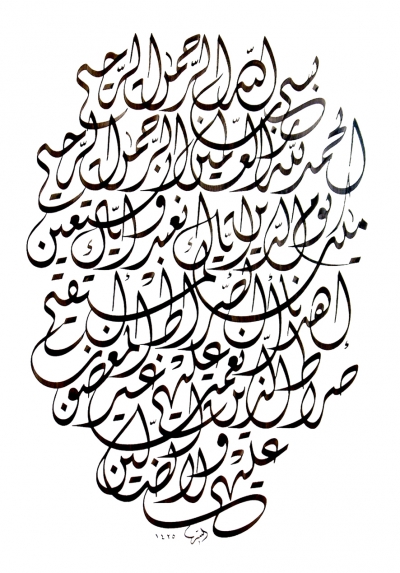 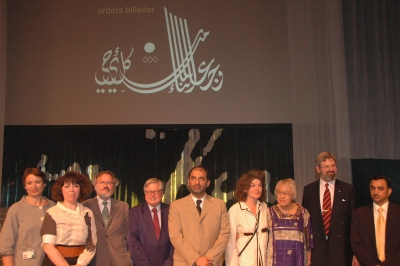 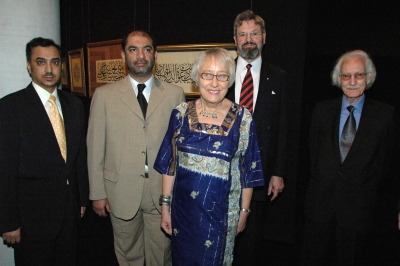 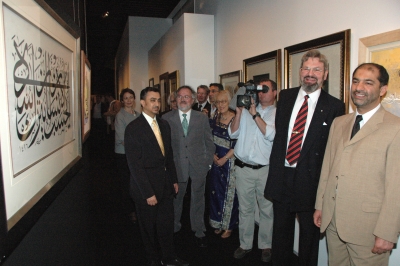 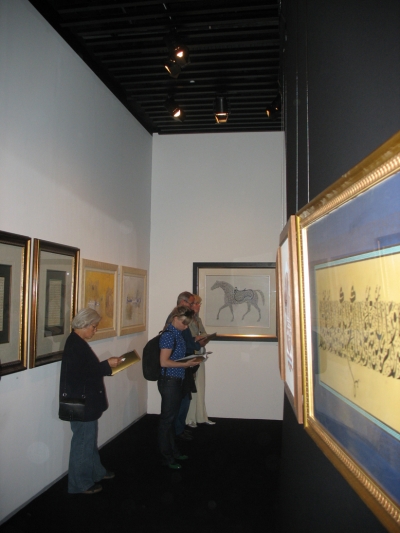 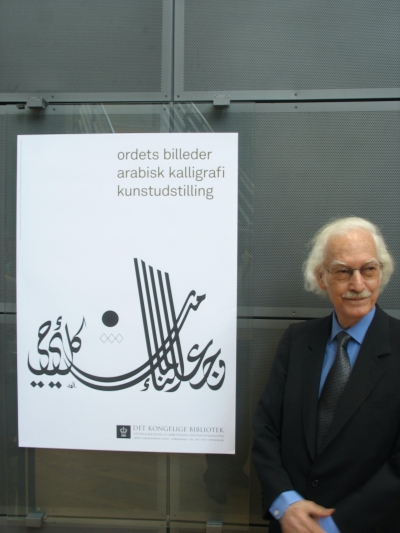 M.S. Saggar in front of the exhibition poster. 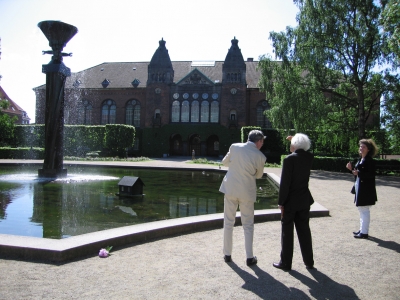 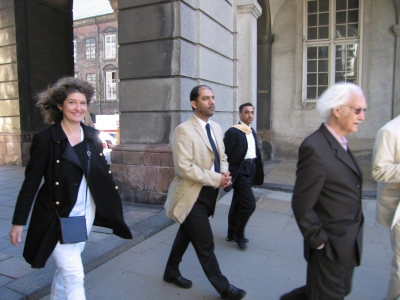 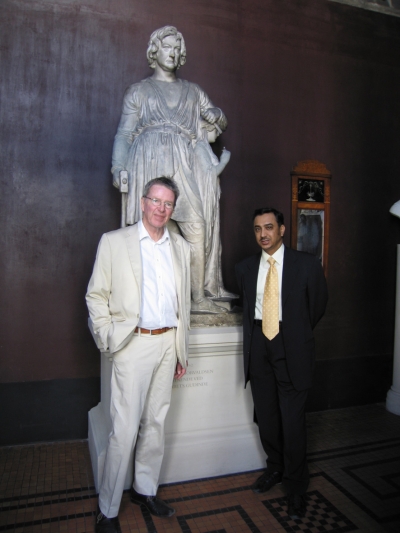 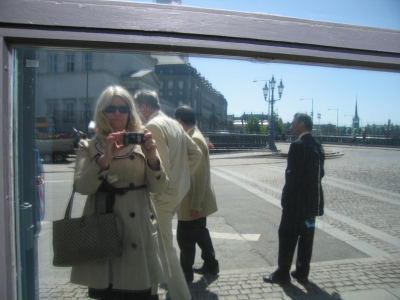